…and it didn’t. To be fair, they weren’t my parades–not even close to being about me. However, I have been in 3 parades/promenades in the last week. (I also watched one more.) This last week I have stated multiple times, “Oh, that cloud looks ominous.” It has gone from sunny to raining quickly, but the rain never interfered with the parading. This week has been full of celebrations and will definitely go down as one of my favorite weeks of this year.

Last weekend (May 18-20th) was the Gabrovo Carnival, a festival of humor. I went last year, and I enjoyed this year just as much. Fellow ETA, Marcus, made his first visit to Gabrovo. We attended the parade in the city center after eating Gabrovo’s finest Chinese food. The parade kicks off the main events with a series of concerts following the parade. The program was in Bulgarian which means even though I had looked at it before, I can’t really glance at Bulgarian. I really have to read it. Upon closer look on Saturday evening, I read that the lead singer of the band Toto would be performing the band’s “biggest hits.” So around 11pm, I was standing in the main square of Gabrovo listening to Bobby Kimball sing “Africa” and “Hold the Line.” Kimball told the crowd that the last time he was in Bulgaria there were 15,000 people which was an odd statement considering there were definitely less than 300 people standing there. As a man, he was eccentric, but maybe it’s just the “former rockstar trying to still be rockstar” thing. But who cares? The music sounded just like the originals, and I got to rock out with all of the people old enough to be my parents. I love how life here is full of surprises.

Wednesday we had a BEST dinner to celebrate the years accomplishments. I am so, so thankful for these students, and I am glad I have a little more time before saying goodbye.

Prom is a huge deal, and while it’s not a national holiday, it sorta is. The 24th of May is a national holiday to celebrate Saints Cyril and Methodius who created the Cyrillic alphabet. It’s a day to not only celebrate the saints but the Bulgarian Education and Culture as well as the alphabet and language. There is a parade through the town with the students and teachers from each school. As each school reaches the main square, the accomplishments of the school for that year are announced. (Fulbright & BEST got a shoutout. As a BEST team, we placed in the top 5 teams at each tournament–including the National tournament.)

After the parade, it was time to turn my attention to prom. I hurried home to wait on two of my students, Tsveti and Kammy, who were doing my makeup and hair for me. They arrived at noon which gave us an hour and a half until I needed to be ready. Perfect. I went to my room to retrieve the dress and shoes to show them.

The dress was hanging exactly where I put it when I brought it back 2 weeks ago, but I couldn’t find my shoes. I started to think that I didn’t actually remember them ever being unpacked. After a couple minutes, I knew I had not brought them. Tsveti asked me why had I not checked a day or more before? Great question. I was asking myself the same.We hurried to the center. There is a shop with a variety of high heels that I have passed numerous times and figured I could find something. Normally this would stress me out, but instead I laughed while I did my best speed-walking. We were in and out with new shoes in 12 minutes according to Kammy. Hurrying back to my apartment, they managed to doll me up in right at an hour. Great work, ladies!

In the fall, Monika, a student I taught last year as an 11th grader, asked me to be her escort to prom. I was flattered. Now, before I go any further into the details of the day. Let me clarify things about prom for my American readers. “Prom” or “Бал” in Bulgaria signifies the end of high school. It is an event for only the graduating class, and while you have an escort for part of the night, this person does not attend the school prom with you. The prom is a nice dinner (including dancing) for the students and teachers. Okay, so back to the story… As Monika’s escort, I also got to attend her “personal prom” where she celebrated with her close friends and family before attending prom that night. We had a delicious meal at a restaurant where I sat near her grandfather. We became quick friends despite the language barrier, and the music being too loud to really talk anyway. He kept toasting me which means I continued to drink the homemade rakia/ракия (a traditional Bulgarian alcohol). I don’t really give into peer pressure, but I decided that I definitely give into grandfather pressure.

After 3 hours, we traveled to the Sports Hall where all the graduates met for photos. I already thought the students were beautiful, but they really showed off this night. From there, students and escorts get into their cars–usually a nice Mercedes or other vehicle–decorated with balloons and begin the drive to the main square. The cars honk along the way, and the traffic is worse than rush hour. Arriving in the main square, Monika’s dad opened her door, and then mine. It felt like we were getting out on the red carpet. There were people lining the entire way to the House of Culture where we would stop and meet her class for more photos. Then, we walked to the school where the students took more photo and had a small ceremony inside the hall. 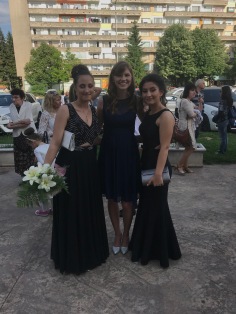 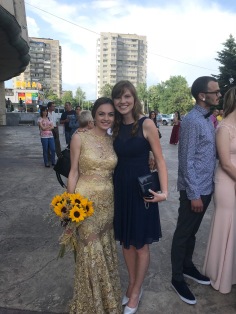 After this, they walk again, class by class (Americans: think like homeroom by homeroom), out of the school and around the Vasil Aprilov statue in front of the school. The area is even roped off for the large crowd. I followed with my mentor, Mary, and we walked from here to the hotel where the prom would take place. Now, this is truly a promenade. I love how the classes are so close as they have been together for 5 years. This is truly a celebration of the last 5 years, and it’s also fun that people from all over the community come to watch.

Prom itself was a blast. Bulgarians know how to have a good time. We ate, danced, and I even managed a slow dance with the PE coach. I taught 3 of the 5 classes as well as coached a few students from one of the classes I didn’t teach–meaning I really knew about 85 of the approx. 125 students. I kept thinking again and again how much I want to be here for next year’s prom as I have taught all of those students. I almost cried at prom a couple times thinking about how much I love these students and this place. 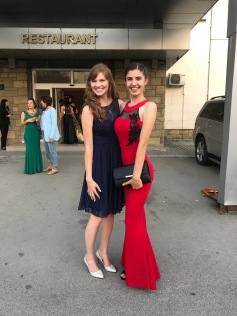 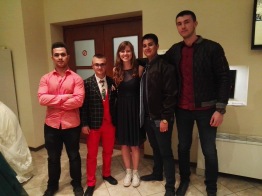 On Saturday, I went with my dance group to the city of Kazanlak. It’s considered the Valley of Roses, and Bulgaria supplies most of the world’s rose oil. For it’s Rose Festival, they held a folklore dancing event. The groups paraded through the street from the Lidl in town to the center plaza where we then performed common dances. After this, each group performed a dance alone before the crowd. I was nervous about messing up, but everything went just fine!!

Later in the evening after returning to Gabrovo, ten of of us traveled to a nearby village, село Гъбене. They were holding a celebration of the village. There were large tents and tables set up in what looked like the central area and store of the village. As the ten of us walked into the event, we definitely got lots of attention. We were a little late, and when you are a village of 220 people, it’s easy to spot the newbies. They welcomed us all the same, and we squeezed into a tent. There was live music all night, so we danced and danced and danced. We watched fireworks. Side note: The fireworks during Gabrovo’s Carnival were probably the best fireworks shown I’ve ever seen, and these were pretty great too. Close to 1am, we finally left the party, but it still wasn’t over. I love how people are able to come together, relax, and not hurry a good time.

There’s been lots and lots to celebrate this week. Many days I wonder how I got so lucky to live here in Gabrovo and know the people I do. I am thankful for the ability to celebrate so much. I have 45 days remaining. While I wish it was 345, I’ll do my best to celebrate a little each day with the time I have.

5 thoughts on “Don’t Rain on My Parade”